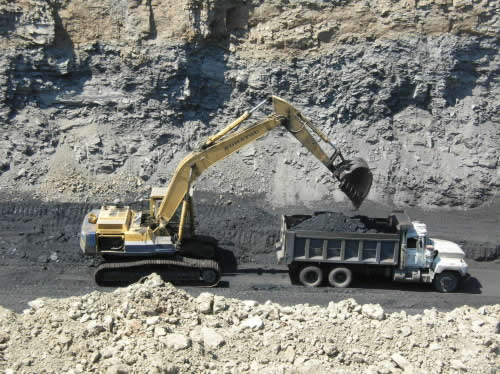 Farrell-Cooper coal mining operation at Bates, Arkansas (circa 2006 photo). The coal that was mined at this locale is the Pennsylvanian Lower Hartshorne coal which has a rank of low-volatile bituminous. 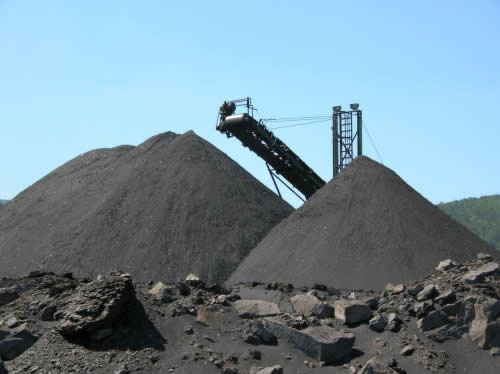 Onsite primary crusher stockpiles the Lower Hartshorne coal at the Bates, Arkansas operation before final shipment of the product to Oklahoma power plants (photo taken in 2006).

Use of Arkansas Coal

Arkansas coal has been used largely to produce steam to power electric generating plants and steam locomotives, as metallurgical coal in steel mills, to heat homes and buildings, and as a source of coal tar and other chemicals. The chemical and physical properties of a coal determine the use. For example, the hard coals, even though they produce less heat, are better adapted to domestic use because they give off less smoke than the soft varieties. Soft coals are usually suitable for the manufacture of coke and coke by-products such as coal tar, ammonium sulfate, gas, benzol, toluol, naphtha, and naphthalene (the principal component of moth balls). Almost all Arkansas hard coals are relatively low in volatile matter or "non-coking." However, some coal in the western part of the coal field becomes coke when blended with high-volatile bituminous coal from other areas. A blend containing 10 to 20 percent low-volatile bituminous coal and 80 to 90 percent high-volatile bituminous coal yields a strong coke that is desirable for metallurgical use. Presently, coal from Sebastian County goes into the manufacture of "charcoal" briquettes. One of the principal advantages of Arkansas coal is that it gives off little smoke when burned. Another is that its sulfur content is relatively low, compared to many coals mined in the United States and elsewhere.

Arkansas's coal fields are located in the Arkansas River valley between the western border of the state and Russellville, encompassing an area about 33 miles wide and 60 miles long 1. Formations of Pennsylvanian age in west-central Arkansas contain at least 25 coal beds, but only the Lower Hartshorne, Charleston, and Paris coal beds have been mined to any appreciable extent 2. The Lower Hartshorne coal bed near the base of the McAlester Formation (Des Moines, Pennsylvanian) is the thickest and the most extensive coal bed in Arkansas. It has been, and will continue to be, the most economically important coal bed 1. Commercial mining of coal in Arkansas has been limited to Johnson, Sebastian, Logan, Franklin, Pope, and Scott Counties 2.

Arkansas Valley Coal Field as drawn on the base of the McAlester Formation. (See picture on the right. Modified from Haley, 1987.) 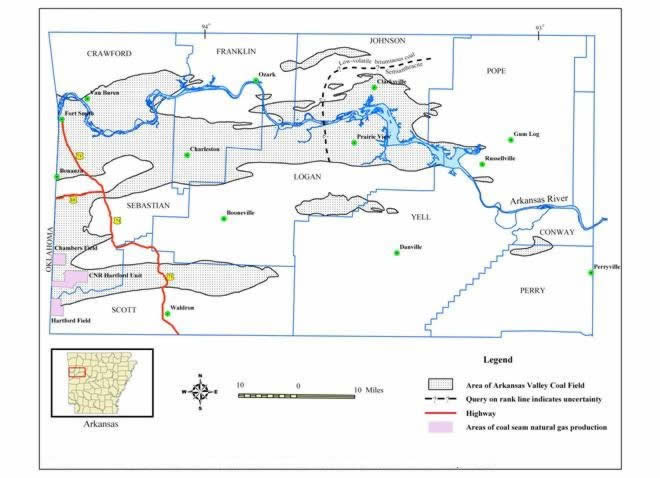 Arkansas coal appeared in literature as early as 1818 3. The first recorded mine output in Arkansas was 220 tons in 1848. After the extension of the Little Rock and Fort Smith Railroad around 1873, coal from the Coal Hill mines in Johnson County was marketed 1. At the Old Spadra mine in Johnson County, a steam plant was installed in 1873. When the St. Louis and San Francisco Railway was extended south to Fort Smith in 1887, numerous mining operations began at Huntington, Hackett, Jenny Lind, Paris, Charleston, Scranton, and other localities in the Arkansas Valley, eventually resulting in extensive development 4.

Coal was first mined in Arkansas from open pits (strip mines). However, as production increased, it became difficult to mine the remaining near-surface coals with the equipment then available, so underground methods were adopted. For many years, most coal was produced from underground mines. With the gradual introduction of larger surface mining equipment, especially draglines, it became economically feasible to resume mining from open cuts. . Surface mining output of coal exceeded that from underground mines from 1957 through 2006. Since 2007, the underground coal production has surpassed that from surface mining again 4.

From 1880 to 1920, coal ranked first in the value of Arkansas’ mineral and fuel output, but since 1922 the value of oil has exceeded that of coal. The peak year of coal mining activity in Arkansas was 1909, when annual production reached nearly 2,400,000 short tons. According to the USGS, the original reserves of coal in Arkansas prior to mining were over 2.2 billion short tons 2. Approximately 107.6 million short tons of coal had been mined through 2016 (Table 1). According to the U.S. Energy Information Administration data, the recoverable coal reserves in Arkansas as of 2015 were 25 million short tons with an average recovery of 60% 5.

The Arkansas coalfields are made up of a series of coal basin districts that underlie parts of an area about 33 miles wide and 60 miles long in parts of Crawford, Franklin, Johnson, Logan, Pope, Sebastian, and Scott Counties (Figure 1). Coal has been mined commercially in two districts of west-central Arkansas (Table 1). Of the 19 or 20 coalbeds in the Arkansas Valley investigated in the past by state and federal agencies, only four have been considered to be of economic importance by the U.S. Geological Survey. They are the Lower Hartshorne, Upper Hartshorne, Charleston, and Paris coalbeds. All of them are entirely of Pennsylvanian age (Figure 2).

The Lower Hartshorne coal rests near the base of the McAlester Formation. It is the most extensive and productive coalbed in Arkansas. Underlying 1,360 square miles, it is greater than 14 inches thick over a 740 square miles area. In Sebastian County, it is up to 8 feet thick locally. Coal rank ranges from low-volatile bituminous in the western part of the Arkansas Valley coalfields to semianthracite in the eastern part.

The Upper Hartshorne coal underlies about 28 square miles of the southwestern Arkansas Valley. Low-volatile bituminous in rank, it is approximately 14 inches thick over an area of about 16 square miles, with a maximum thickness of 34 inches. It has been mined in one surface operation, located between Hartford and Huntington.

The Charleston coalbed lies near the base of the Savanna Formation, and is 800 to 900 feet stratigraphically above the Hartshorne coalbed. The Charleston coalbed extends over an area of about 120 square miles and has been mined by many strip operations in both the east and west districts. The maximum thickness of the coalbed is about 23 inches, and it is 14 inches thick over an area of 52 square miles. In the western part of the Arkansas Valley, the coal is low-volatile bituminous in rank, whereas in the eastern part it is semianthracite. The Charleston coalbed in Franklin and Johnson Counties is known locally as the Philpott coal.

The Paris coalbed occurs near the top of the Savanna Formation, 1,000 to 2,000 feet stratigraphically above the Hartshorne bed, underlying three small areas that total 18 square miles. The Paris coalbed ranges in thickness from 14 to 32 inches. 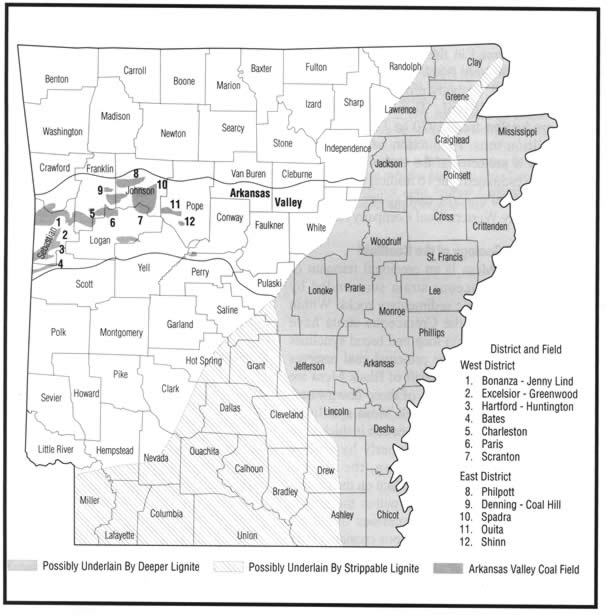 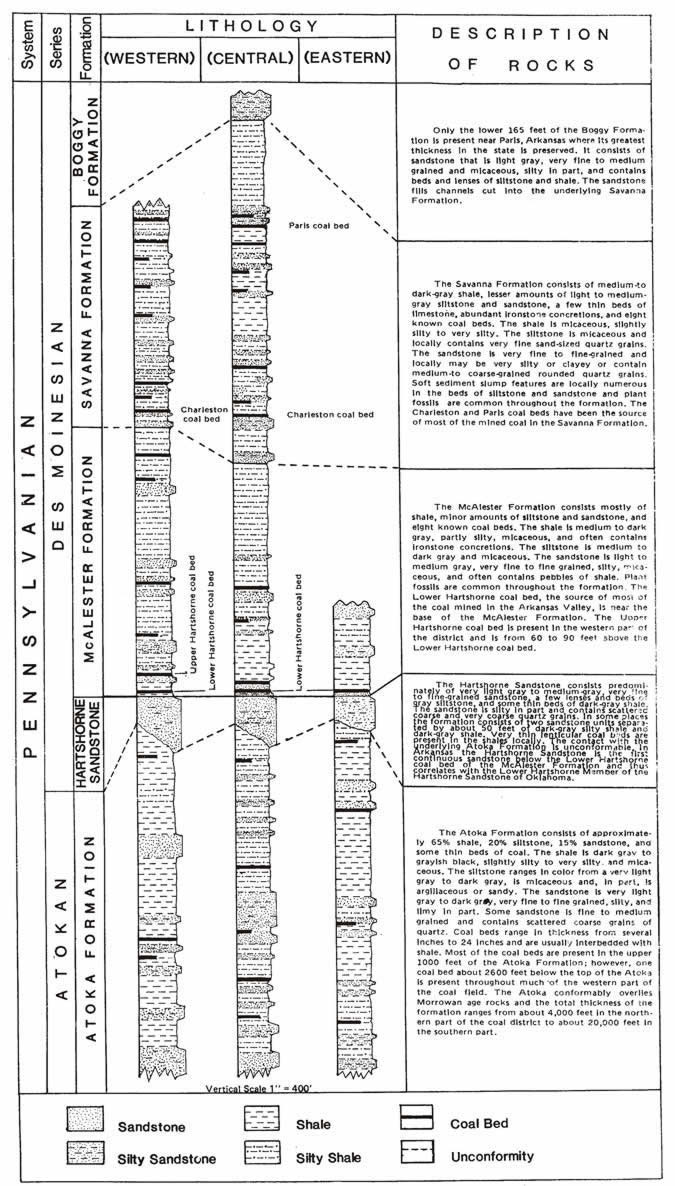 Coal is commonly analyzed by its major components, which are moisture, volatile gases, fixed carbon, ash, and sulfur. Volatile gases and fixed carbon are the fuel elements. Water, ash and sulfur are the impurities. The higher rank (harder) coals are commonly classified according to their fixed carbon content, and the lower (softer) coals according to their heat value. Arkansas Valley coals are all of high rank. They range from low-volatile bituminous coal in the western part of the Arkansas to semianthracite in the eastern part.

Table 1 summarizes analyses of 258 samples of Arkansas coal and shows the average analyses of coal that has been mined from various coal beds and fields in the state. Heat value is shown in British thermal units (Btu). One of the principal advantages of Arkansas coal is that it gives off little smoke when burned. Another is that its sulfur content is relatively low, compared to many coals mined in the United Stats and elsewhere.