Elemental bromine (Br) is the 25th chemical element in order of abundance in nature and is a component of some brines. At room temperature, bromine is a highly corrosive, reddish-brown, volatile liquid which, along with fluorine (F), chlorine (Cl), and iodine (I), forms a family of elements known as the halogens. The word "halogen" means salt producer. Brine is another name for salt water and is found throughout the world in varying concentrations in oceans, briny lakes, inland seas, in salt beds and within subsurface geological formations.

Although there are many uses for bromine, nearly one-half of the bromine consumed annually is used in flame retardants. Other uses of bromine include insect and fungus sprays, anti-knock compounds for leaded gasoline, disinfectants, photographic preparations and chemicals, solvents, water-treatment compounds, dyes, insulating foam, hair-care products, and oil well-drilling fluids.

During the Paleozoic era (543 to 248 million years ago), southern Arkansas was covered by seawater. Bromine, which occurs naturally in seawater, was extracted from the water by seaweed and plankton. As these organisms decomposed during the Jurassic period (206 to 144 million years ago), bromine was released, leaving heavy salt concentrations called brines in Union and Columbia counties. The Upper Jurassic Smackover Formation contains the richest of these brines (5,000 to 6,000 ppm) at a depth of 7,500 to 8,500 feet. The brine is believed to have migrated into the Smackover from the underlying Louann Salt, through the intervening Norphlet Formation.

Since 2007, all US bromine has been produced in southern Arkansas. In 2013, 28% of the global bromine production (225,000 tonnes) in Arkansas made the United States the second-largest producer of bromine, after Israel. At an advertised price of US$3.50 to US$3.90 per kg, the 2013 Arkansas production would have a value of roughly US$800 million 1.

The first bromine production of Arkansas occurred in Union County in 1957 and has continued ever since. To date, the two active bromine producers in southern Arkansas are Albemarle Corporation and Chemtura, whose bromine operations together employ 950 people. Albemarle Corporation, whose corporate headquarters is in Baton Rouge, Louisiana, operates two main plants at Magnolia, in Columbia County, Arkansas, and some satellite plants in Union County. In 2007, Albemarle had capacity to produce 148,000 tons of bromine per year.

Chemtura, a Philadelphia-based corporation, operates four plants through its subsidiary, Great Lakes Solutions. Three plants are in the vicinity of El Dorado, and all in Union County, Arkansas. In 2007, Chemtura had the capacity to produce 130,000 tonnes of bromine per year.

Annual bromine production in Arkansas has been updated in the Arkansas Oil and Gas Commission Annual Report of Production 2.

Bromine is present in abnormally high concentrations in salt brines of the Smackover Formation (Oxfordian, Upper Jurassic) in south-central Arkansas. Bromine was originally extracted from ancient marine waters by seaweed and plankton. In Arkansas, organisms decomposed during the Jurassic period (206 to 144 million years ago) and bromine was released, leaving heavy salt concentrations called brines in Union and Columbia Counties. It is thought that brines in the Louann Salt Formation migrated through the overlying Norphlet Formation and into the Smackover Formation at a depth of 7,500 to 8,500 feet.

Schematic cross-section of a typical brine production well and basic stratigraphic relations. Note that relatively large 5 ½ inch production tubing is utilized due to the large volumes of brine that is produced. (See on the right - Photo courtesy of the Albemarle Corporation).

When oil was discovered in south Arkansas in 1921, oil field brines were considered a worthless byproduct of drilling, and the oil producers had problems disposing of the salt water. Chemists from the Arkansas Geological Commission (now the Arkansas Geological Survey) discovered that the Smackover brines had high bromine content –4,000 to 4,600 parts per million, or about seventy times greater than that of modern ocean water. The first commercial recovery of bromine in Arkansas was from Union County in 1957, and production has been continuous since that time. Arkansas’ industry continues as the world's leading producer of bromine, averaging 40 percent of the world's production for the 5-year period between 1986 and 1990. During the same period, the average rate of growth of Arkansas's bromine recovery was more than 20 million pounds per year. U. S. production in 2001 was 212,000 metric tons, valued at $159 million, with Arkansas’ output accounting for 97 percent. Arkansas brine production for 2013 is estimated at 267,503,967 barrels according to the Arkansas Oil and Gas Commission. Bromine presently is recovered from brines in Columbia and Union Counties mainly by Great Lakes Chemical Corporation and the Albemarle Corporation. 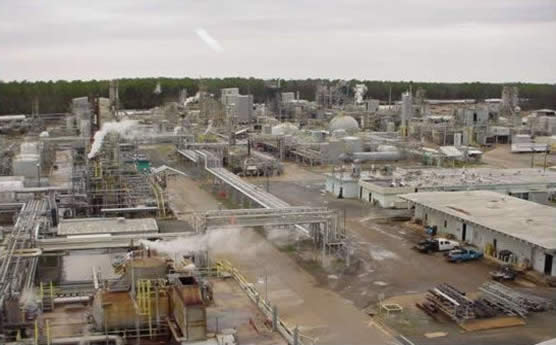 Commercial quantities of bromine are extracted from subsurface brines at the Albemarle-Magnolia South Plant. 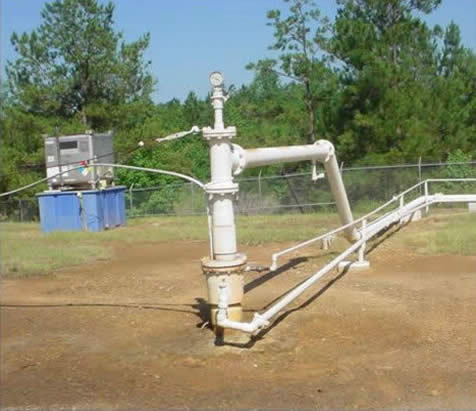 Although there are many uses for bromine, nearly one-half of the bromine consumed annually is used in flame retardants. Other uses of bromine include medicines, insect and fungus sprays, anti-knock compounds for leaded gasoline, disinfectants, photographic preparations and chemicals, solvents, water-treatment compounds, dyes, insulating foam, hair-care products, and oil well–drilling fluids.

Elevated levels of bromine-derived chemicals have the potential to negatively affect human health. Bromine is dangerous if it comes in contact with skin, and its vapor is harmful if inhaled. For these reasons, worker safety at the commercial sites of production is monitored closely.