Crude oil resources in the state were discovered and produced in the southern part of the Gulf Coastal Plain of south Arkansas, which includes the following ten counties: Ashley, Union, Ouachita, Columbia, Nevada, Hempstead, Bradley, Calhoun, Lafayette, and Miller. Historically, most of the oil production has been in Union, Lafayette, Columbia, and Ouachita counties. These four counties have been responsible for more than eighty-five percent of the oil produced in Arkansas.

History of Discovery and Exploration

The first Arkansas well that yielded sufficient quantities of oil was the Hunter No. 1 that was drilled in April 16, 1920 near Stephens, in Ouachita County. A few days later, gas was discovered in the northern part of the present El Dorado field in Union County by the Constantin Oil and Refining Company. On January 10, 1921, oil was discovered in the S. T. Busey well (below) in the same field. The S.T. Busey well marked the beginning of commercial oil production in Arkansas. 1

See on the right - Historic photograph of the S.T. Busey well that marked the beginning of south Arkansas oil production in 1921. (Photo courtesy of the Arkansas Natural Resources Museum, Smackover, Arkansas). 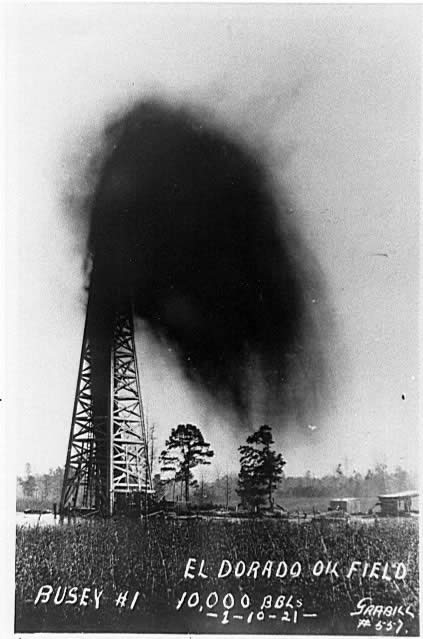 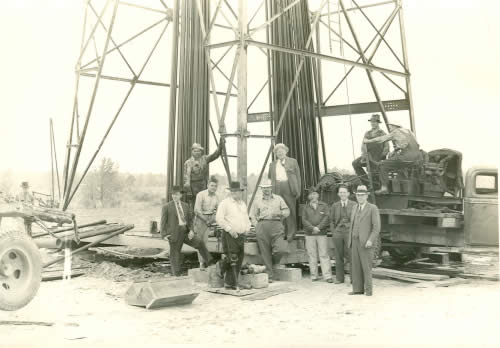 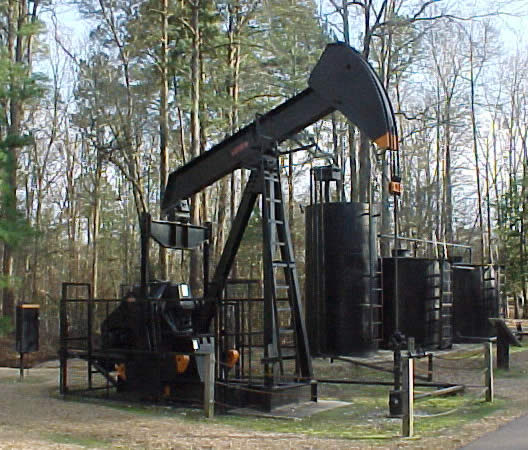 Upper Jurassic (Oxfordian) Smackover lime mudstones are the major source rock in south Arkansas. The reservoir rocks in this region are widely distributed in the sandstones and limestones of Cretaceous and Jurassic sections.

Evaluation of the source uses the methods of geochemistry to quantify the nature of organic-rich rocks which contain the precursors to hydrocarbons, such that the type and quality of expelled hydrocarbon can be assessed.

The reservoir is a porous and permeable lithological unit or set of units that holds the hydrocarbon reserves. Analysis of reservoirs at the simplest level requires an assessment of their porosity (to calculate the volume of in situ hydrocarbons) and their permeability (to calculate how easily hydrocarbons will flow out of them). Some of the key disciplines used in reservoir analysis are the fields of stratigraphy, sedimentology, and reservoir engineering.

The seal, or cap rock, is a unit with low permeability that impedes the escape of hydrocarbons from the reservoir rock. Common seals include evaporites, chalks and shales. Analysis of seals involves assessment of their thickness and extent, such that their effectiveness can be quantified.

The trap is the stratigraphic or structural feature that ensures the juxtaposition of reservoir and seal such that hydrocarbons remain trapped in the subsurface, rather than escaping (due to their natural buoyancy) and being lost.

Analysis of maturation involves assessing the thermal history of the source rock in order to make predictions of the amount and timing of hydrocarbon generation and expulsion.

Finally, careful studies of migration reveal information on how hydrocarbons move from source to reservoir and help quantify the source of hydrocarbons in a particular area. 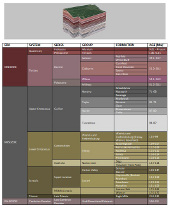 Sedimentation in the Gulf Coastal Plain in south Arkansas was associated with rifted continental margin tectonics resulting from the breakup of Pangea and the opening of the Gulf of Mexico. Triassic graben-filled red beds were deposited locally as the oldest Mesozoic strata above pre-rift Paelozoic basement during the early stages of extension and rifting.