The principal ore of aluminum is bauxite, a complex mixture of a number of aluminum hydroxides and hydrous aluminum oxides. The most common aluminum-bearing minerals in bauxite are gibbsite (AlOH3), boehmite (AlO(OH)), and diaspore (AlO(OH)). In the Arkansas deposits, diaspore has not been reported. Free quartz along with iron and titanium oxides are common components. Bauxite ranges in color from off-white to deep reddish brown, and structurally from a soft earthy material to a well-cemented rock.An easily recognizable oolitic (BB-sized concretions) to pisolitic (pea-sized concretions) grain texture characterizes many bauxite deposits, including those in Arkansas. Commercial bauxite usually has a minimum content of 50 to 55 percent alumina (Al2O3). 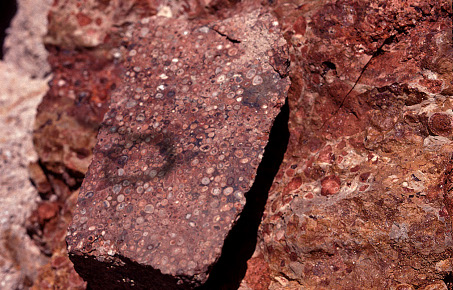 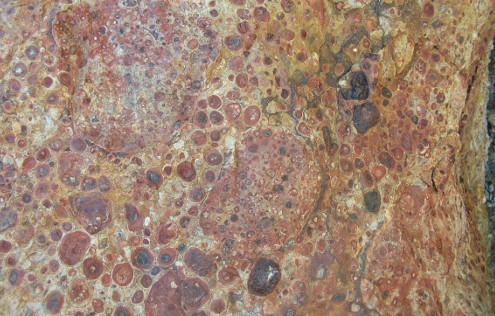 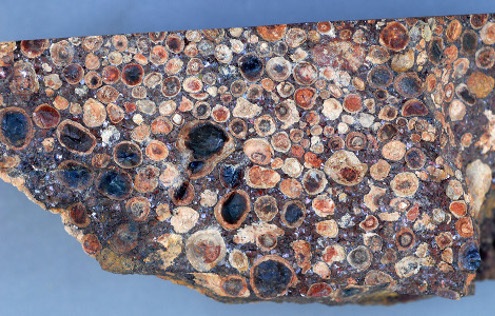 In the bauxite refining process, the aluminum-bearing minerals in bauxite are converted in a multiple-step process to alumina (Al2O3). Alumina can be smelted to form metallic aluminum or it can be used as the source of many other products, including refractory materials used to line high-temperature rotary kilns and metallurgical furnaces. In addition, alumina is a source of many chemicals used in the paper and ceramic industries, in petroleum refining, and in some water-purification processes. Other significant uses include the production of synthetic corundum for the manufacture of abrasive stones and grinding wheels, as propants in the petroleum-production industry, and as an ingredient in deodorants, antacids, and some medicines.

The Arkansas bauxite region covers about 275 square miles in the northern part of the West Gulf Coastal Plain and is divided into two mining districts. One area is in Pulaski County south and east of Little Rock and the other is in nearby Saline County, northeast and east of Benton. The bauxite is present mostly as sheet or blanket deposits in very close proximity to outcrops of the intrusive igneous rock, nepheline syenite. The deposits formed in early Tertiary time, developing as soils along the western edge of a shallow marine basin that occupied the Mississippi River Embayment. During that time, hills and knobs of syenite as islands were exposed to intense chemical weathering in a tropical or near-tropical environment (lateritic weathering). In the weathering process, leaching by rain, ground water, and perhaps by salt spray, decomposed the original igneous rock minerals (feldspar and nepheline), removed much of the silica, and concentrated the newly formed oxides and hydroxides of aluminum as the rock we term bauxite. These are residual deposits because they formed essentially in place (in situ paleo-soils). Many other deposits, generally smaller, consist of bauxite removed by erosion from its site of origin and redeposited nearby (transported deposits).

Mining of bauxite for metal production began in 1898 and was continuous for that purpose until 1982. Because of changing domestic and world economic market conditions, 1982 was the last year in which bauxite was mined in Arkansas for aluminum metal. Small tonnages continue to be mined and used in the production of a variety of alumina-based materials, including various chemicals, abrasives, and propants. Arkansas continues to be the nation's leader in bauxite production, most ore processed in the USA being imported.