In Arkansas, chalk is the major constituent of two extensive Cretaceous formations: the Annona Chalk and the Saratoga Chalk. These sedimentary deposits are exposed in a trend extending northeasterly from Foreman in Little River County to Arkadelphia in Clark County and dip gently to the south-southeast. Of these two formations, only the Annona has had commercial production. 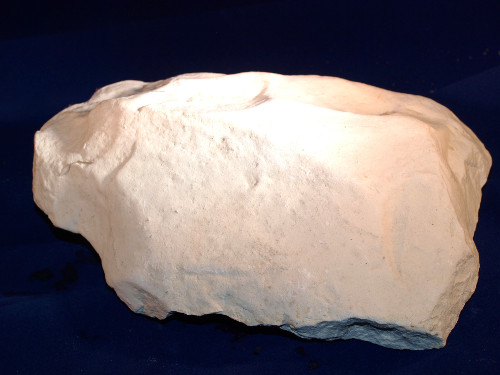 The Annona Chalk is a hard, white, thick-bedded, massive chalk containing few macrofossils. It is exposed 2.5 miles north of Columbus in Hempstead County westward to Foreman, for about 35 miles across Hempstead, Howard, and Little River Counties. North of Columbus, the chalk is less than 1 foot thick and pinches out to the east. The best exposures of the Annona Chalk are in the vicinity of Foreman and at White Cliffs Landing on the Little River, both in Little River County. At White Cliffs Landing, the chalk has a maximum exposed thickness of about 100 feet.

In 1929, a cement-manufacturing plant was erected in southwest Arkansas near Saratoga. A second plant was built near Foreman in 1958. Both mined the Annona chalk from open pits. The plant near Saratoga closed in the early 1990's after about 60 years of operation. The mine has now been reclaimed and became part of Millwood Lake. For a brief period, the Annona chalk also was mined by open-pit methods at White Cliffs Landing for cement and whiting, but the chalk proved to contain too much silica and mining ceased. In 1969, the Arkansas Geological Commission and the U. S. Bureau of Mines, using outcrop data, calculated chalk reserves of 700 million tons in the Annona Chalk in Sevier and Howard Counties.

Chalk, used for the manufacture of cement, continues to be mined near Foreman by Ash Grove Cement Company. The plant near Foreman is presently the 28th largest facility by capacity in the United States. In 2007 plans were announced for the replacement of the existing plant by a new $350 million plant, with an increase in production from 1 million tons/year to 1.7 million tons/year. Ash Grove Cement is the largest American owned cement company in the USA.