Greensand is the name commonly applied to a sandy rock or sediment containing a high percentage of the mineral glauconite. Glauconite ((K,Na)(Fe3+,Al,Mg)2(Si,Al)4O10 (OH)2) is a greenish-black to blue-green mineral which forms in shallow marine sedimentary deposits. Because of its potash and phosphate content, greensand has been marketed for over 100 years as a natural fertilizer and soil conditioner. Greensand is recommended by organic gardeners as a mulch, top dressing, and soil- conditioning additive for both potted plants and vegetable gardens. The slow release rate of plant nutriments (potash and phosphate) minimizes the possibility of plant damage by fertilizer "burn" while the mineral's moisture retention aids soil conditioning. Early in the 1900's, glauconite was recognized as having chemical exchange properties in water solutions, which led to its use as a water softener. 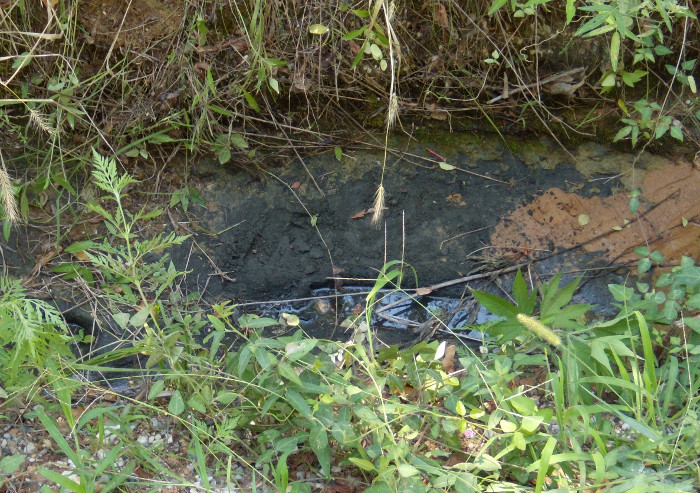 In southwest Arkansas, greensands are abundant in the Cretaceous Nacatoch and Ozan Formations. Greensands in the Nacatoch Formation are more extensive, contain higher percentages of glauconite, and are richer in potash (2.8-4.5 percent) than the Ozan Formation. These formations extend from the Oklahoma-Arkansas state line near Foreman in Little River County northeastward to Arkadelphia in Clark County and dip gently to the south-southeast. Greensands of the Nacatoch are exposed intermittently from Columbus, Hempstead County, to Terre Noire Creek in Clark County. Notable exposures are present near Washington, Hempstead County, and along the banks of a branch of Moore's Creek in Clark County. Outcrops of the Ozan Formation are scattered, extending from western Little River County near Foreman to north-central Hempstead County. The glauconite is present in a sandy micaceous marl near the base of the formation. This basal sand can be 3 to 15 feet thick and contain up to 50 percent glauconite.

Markets for greensand consist of small- to medium-sized water treatment companies providing domestic and small water-system services and designers and manufacturers of medium to large water-treatment systems who service their installed facilities. Also, potential exists to market Arkansas greensand at organic garden supply stores as a bagged commodity. Presently, in the United States, economical greensand deposits contain at least 90 percent glauconite. The deposits must not contain more than 2 to 3 percent clay matrix and must show no evidence of weathering. There has been no mining of greensands in the state.