Marl is a sediment or sedimentary rock that is a mixture of clay and calcite (CaCO3). Arkansas marls may also contain glauconite, sand, and marine shell deposits. Marl is used in the manufacture of cement and for agricultural purposes.

Buff to tan marl from the Ozan Fm. 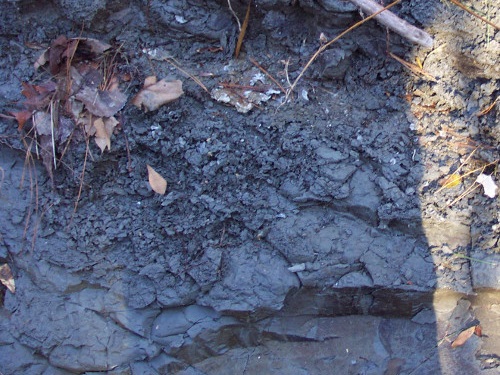 Commercially, the most important marl-bearing formation in Arkansas is the Marlbrook Marl, a dark blue-gray, fossiliferous, chalky sedimentary unit of Cretaceous age. It may contain minor sand, glauconite, or phosphate grains. The Marlbrook Marl, which can be 220 feet in thickness, dips gently to the south-southeast at about 80 feet per mile. Exposures are present from near Arkadelphia, Clark County, southwestward to Foreman in Little River County. Particularly notable exposures of the Marlbrook Marl are present in and near Ozan Creek south of the community of Ozan along Arkansas Highway 4 in Hempstead County. The Ozan Formation, another marl-bearing unit, and the Brownstown Formation are sandy marls containing glauconite, some phosphate nodules, and invertebrate shells. The Arkadelphia Marl is chiefly marl and marly clay containing sandy clay and limestone, and impure chalk. All of these Cretaceous formations dip gently to the south-southeast and crop out along the same trend.

In Arkansas, the Marlbrook Marl is currently used as a source of silica in the manufacture of cement. Ash Grove Cement Company mines marl near the community of Foreman, Little River County.