Novaculite is a sedimentary rock composed mostly of cryptocrystalline (1-5 micron) quartz and is a recrystallized variety of chert. It is dense, hard, white to grayish-black in color, translucent on thin edges, and has a dull to waxy luster. It typically breaks with a smooth conchoidal (shell-like) fracture. The word novaculite is derived from the Latin word novacula, meaning razor stone. Whetstone grade novaculite has a distinct triple point texture, developed by pressure metamorphism during the formation of the Ouachita Mountains. 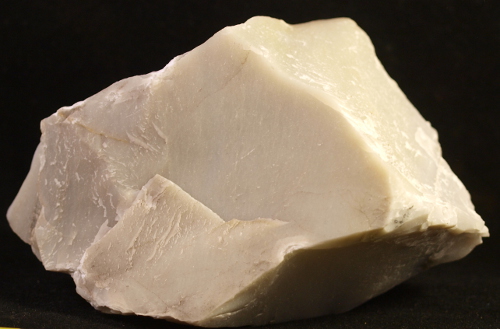 Although the Arkansas Novaculite formation is widely distributed in the Ouachita Mountains of Arkansas, deposits of commercial interest are located along the southern edge of the Benton – Broken Bow Uplift. Because it is highly resistant to erosion, it forms prominent ridges. The formation of Devonian and Mississippian age consists of massive upper and lower divisions of novaculite interbedded with a middle division of thinly bedded novaculite and shale. Its stratigraphic thickness ranges from about 60 feet in the north to 900 feet in the southern Ouachita Mountains, but may be greater on outcrop due to repetitive faulting.

Arkansas novaculite is recognized worldwide for its use as whetstones and oilstones, which are used for sharpening knives, surgical instruments, and wood-carving tools. In the early 1800's, a quarry of honestone near Magnet Cove in Hot Spring County was mined by early settlers. Records show that novaculite mining in Arkansas was intermittent from 1885 to 1905, but continuous ever since.

Novaculite for abrasives is mined mostly in Garland and Hot Spring Counties. It is classified by the abrasives industry into two general categories: "Arkansas" stone and "Washita" stone. "Arkansas" stone is extremely fine-grained, uniform, has a waxy luster, and is typically white or light gray. "Washita" stone is less dense, more porous, and has the dull luster of unglazed porcelain. When quarrying novaculite for whetstones, little or no explosives (and then only black powder) are used because blasting, combined with the brittle nature of the stone, tends to cause excessive fracturing, reducing the amount of useful stone. Rough novaculite blocks are cut by circular diamond saws, using large amounts of degradable lubricant or water as a coolant. The preformed stones are lapped (smoothed) on horizontal rotating grinding machines, using industrial abrasive grits, such as silicon carbide.

Commercial whetstone mines were active in Arkansas until the development of less costly synthetic abrasives. Following an industry slump, the demand for natural honestones and oilstones has increased over the past two decades, resulting in increased quarry output. In 2007, there were 8 companies that mined and processed whetstones in the Hot Springs area. The tonnage of novaculite mined for abrasives applications is withheld to avoid disclosing company proprietary data. Interest in novaculite as oilstones has increased in recent years, due to it being viewed as a more "natural" product than synthetic alternatives.

Other uses of novaculite have included concrete aggregate, road construction material, railroad ballast, riprap, high-silica refractories, and for the recovery of silicon metal. The massive novaculite of the Upper and Lower Divisions of the Arkansas Novaculite is a source of high-purity silica (>99 percent). Individual quarries for novaculite extend from Little Rock in Pulaski County westward to Hatton in Polk County.

There is an extensive, uncalculated, resource of massive novaculite in the Ouachita Mountains. However, top-quality whetstone-grade material appears to be restricted to Garland and Hot Spring Counties. The available tonnage is quite variable from one deposit to another. The market for natural whetstones and oilstones should continue to increase, but competition by other natural and manufactured abrasives may prevent rapid expansion. In 2005, Arkansas ranked 1st in the nation in silica stone (abrasives) production.